Pepperdine University proudly welcomes John Miller, retired Principal Bassoon of the Minnesota Orchestra, master teacher and founding father of Bubonic and Buddhist Bassoon Quartets for two jam-packed days of bassoon performances, classes and lectures. All sessions are FREE and open to the public and will take place on the Malibu Campus Friday and Saturday, April 21 and 22, 2017.

Q & A with John Miller during orchestra rehearsal

COME ONE, COME ALL, AND BRING YOUR BASSOONS AND CONTRABASSOONS! FREE AND OPEN TO ALL LEVELS. Room MB105
This afternoon session will begin with an overview of the not-so-stuffy history of Bassoon Ensembles - like the Bubonic and Buddhist Bassoon Quartets founded by Miller and bass clef bassoon buddies of yore. This travelogue into the depths will be followed by THE BASSOONER THE BETTER BAND made up of all bassoonist attendees, with a quartet of professionals serving as section leaders. All guided by COACH and BASSOONAGOGUE MILLER! It's bound to be a blast!

John Miller received his early musical training at the Peabody Conservatory in Baltimore and the New England Conservatory in Boston, (MM, Artist Diploma). He also holds a BS degree in humanities and engineering from MIT and was awarded a Fulbright grant for music study in Amsterdam, (1964-65). While in Boston he founded the Bubonic Bassoon Quartet and made the premier recordings of the Hummel Bassoon Concerto, released with the Weber Concerto on Cambridge Records, and Zelenka's Sonatas for Two Oboes and Obbligato Bassoon, (4-6), on the same label. He became Principal Bassoon of the Minnesota Orchestra in 1971 and retired from his position in January, 2016, having become the longest serving principal player in the 100+year history of that orchestra. He remains on the faculty of the University of Minnesota where he has taught since 1971. His long solo career has included performing the major bassoon repertory with the Minnesota Orchestra and numerous other orchestras around the world. In addition to teaching at Boston University, New England Conservatory, Sarasota Music Festival, and Las Vegas Music Festival, he has presented master classes and recitals at many of the world's leading conservatories and music schools. In the late 1980s Mr. Miller, in collaboration with bassoon manufacturer Alan Fox, helped to develop America's first professional level bassoon, the FOX Model 601, which he has played exclusively since 1991. Among his solo recordings are four concertos by Vivaldi, and the Mozart and Vanhal concertos, all conducted by Sir Neville Marriner on two Pro Arte CDs. For more than 20 years he was a member of the American Reed Trio. His teachers have included Louis Skinner, Arthur Weisberg, Stanley Petrulis, Sherman Walt, Stephen Maxym, and Thom de Klerk. One of Mr. Miller's educational activities, the Nordic Bassoon Symposium, begun in 1984 as the John Miller Bassoon Symposium, has attracted an international mix of hundreds of professional, student, and amateur bassoonists. Another, the Minnesota Bassoon Association, formed in 1983, presents bassoon related events, and has brought most of the world's prominent bassoonists to the Twin Cities area. Four years ago he joined with several local musicians to found the Minnesota Bach Ensemble, a small group dedicated to performing the music of J.S.Bach. 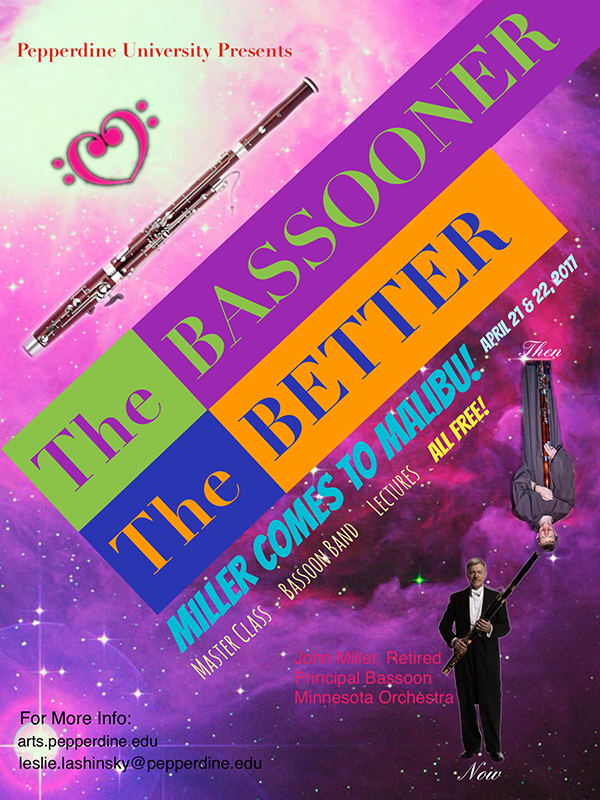 Open Tuesday through Friday, noon to 5 PM,
and two hours prior to most performances.