Junhong Kuang, 19, is from China, and began receiving professional training in classical guitar at the age of 9 with Professor Xu Bao in Chengdu, China. Only two years later at the age of 11, he won 1st prize in the Thailand International Guitar Competition. He was accepted into the Peabody Conservatory of the Johns Hopkins University when he was only 15 years old, and was awarded a top prize in the prestigious ARD International Music Competition at the age of 17, making him the youngest prize winner in ARD history. He is currently studying under the tutelage of the legendary maestro Manuel Barrueco.

Kuang is an accomplished concert performer. In the United States, he made his New York debut at Carnegie Recital Hall, and he has played recitals in Baltimore, Miami, and at Symphony Space in New York City. In China, he has performed recitals in the Oriental Art Centre Hall in Shanghai and the Poly Theatre in Beijing. Kuang has performed as a soloist with several orchestras around the world, including the Symphony Orchestra of Dance and Theatre in Beijing, the Xiamen Philharmonic Orchestra, the Sichuan Conservatory of Music Symphony Orchestra, and the Estonian National Symphony Orchestra.

This year he will perform the Concierto de Aranjuez by Rodrigo with the Peabody Symphony Orchestra and appear in recital at the prestigious Shriver Hall Concert Series in Baltimore, as the winner of Peabody's Yale Gordon Concerto Competition. 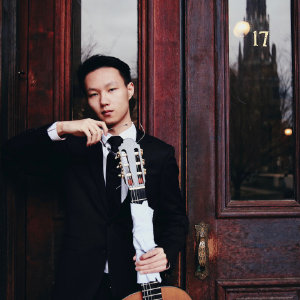