Emanuele Buono was born in Turin, Italy, in 1987. In 2005 he graduated with full marks from the "Giuseppe Verdi" Conservatory in Milan, where he is currently pursuing a music diploma. He also received a three-year diploma from the "Francisco Tarrega" Academy and has attended the International Master Classes of "Accademia Musicale Chigiana di Siena" every year since 2007. He was awarded first prize at the XXXIII International Guitar Competition in Gargnano, Italy. He was the first Italian winner of the Ruggero Chiesa International Competition in Camogli, Italy, also winning the award for best interpretation of a romantic piece as well as the audience choice award. 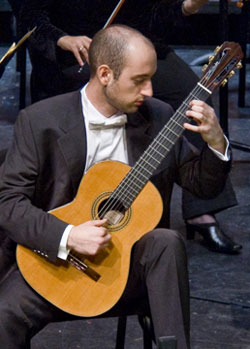